The Rotten Timber Frame, and the House Itself

The house is of course mine, and is one of the reasons that I am associated with Smiths Clear Penetrating Epoxy Sealer (CPES)™ in the first place, having been a user of it over many years now. Old houses, lots of wood, a bit of research, you end up using CPES (Or Lignu as it was called when I imported it from Sweden). The house was built around 1880, and is of a mock Tudor construction. In 1880 that meant a timber frame which is in softwood in my case. The house has had many additions, most worse built than the original part, and has suffered from some neglect in the past. In particular it has a very rotten timber frame at the back under a leaky bathroom.

This particular beam measures 7″ by 5″ and spans the back wall of my house. Replacement of it would have posed something of a serious issue as it functions as a lintel over some door and window frames. In the rotten area, which was over 2 feet long, it just supports joists, and the stud and brick on end construction that was a (presumed later) addition to the house that is the bathroom where the leaks came from.

NOTE: Click on any picture to see it full size, then use the back button to return to the article.

The Rotten Timber Frame and The Causes of the Rot 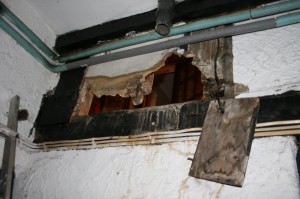 The timber on the bottom of the hole is the primary affected timber. It looks OK from the outside, but closer inspection revealed the truth. The sawn off cast iron waste pipe was connected (or rather wasn’t connected) to the bath inside, through pipes that ran through the hole. 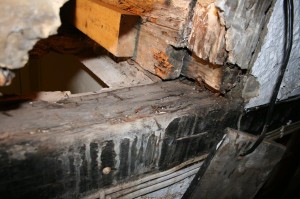 This damage has been caused by a bath drain that has leaked for at least 15 years, and a leaking window above that has also failed many decades ago. 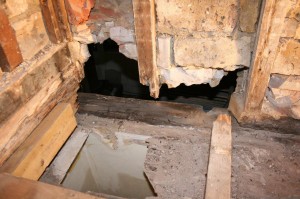 The view from the inside confirms the picture. There is one joist completely missing from this photo, and the joist on the right has lost the end of itself to rot. The foot for the Studs has completely rotted in the affected area and the base of the studs are also affected. The Lath and cement ceiling now sports some serious ventilation for the toilet below, and affords rather less privacy than it should… 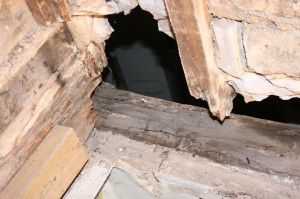 The end of the next structural timber, that runs towards the front of the house, is also affected by rot, but not enough to cause worry, just stop the rot from recurring.

The Repair Must Carry Joists and a Bath, and the Rot Must Be Stopped

There is a solid wall below the rotten timber, so my aim here is to consolidate the timber to the point where it will carry the joists, with a LARGE bath on them, without being crushed. 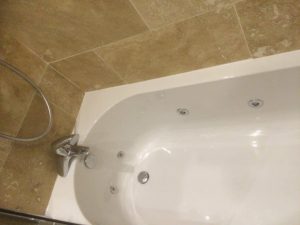 This photo shows the same corner of the finished bathroom. That bath is 1800 * 800mm, so will contain approximately a quarter of a tonne of water (250kg) when filled.

This degree of consolidation can easily be achieved by using Smiths CPES™, which will furthermore protect the wood from rot in the future. As this timber is now inside, and the new bath will have a proper drain, and the new window will be fitted properly, there will be no leaks to worry about, so more rot should not be an issue.

Smiths CPES will penetrate deeply into all of the rotten timber, the stuff that we can see, and the stuff that is less rotten that we can’t, by running along the fibres of the wood, and through all rotten areas. It will leave those fibres coated in, and consolidated by, the Epoxy resin in CPES, which will add the strength to the wood to carry the joists, and prevent further rot. 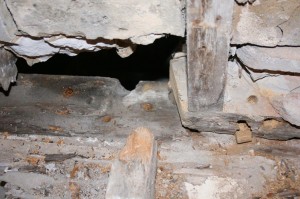 Initially holes are drilled through the timber to aid penetration of the CPES into the timber.

These holes can be fairly large, and should penetrate deeply into the timber, but NOT pass through the timber. We want the CPES to saturate the rotten wood, not pour down the wall below! 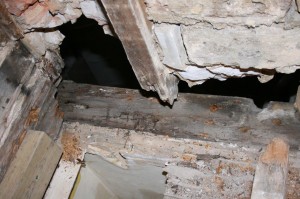 Many holes are drilled in all affected timbers. 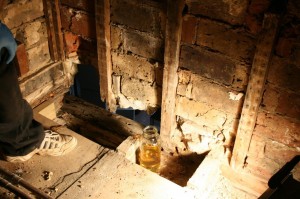 Easy mixing by marking a straight jar with marks at 8 and 16cm, and filling to the first with Part A, the second with Part B. 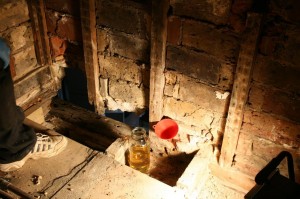 A funnel pushed into the drilled hole makes it even easier to add the CPES.

Keep pouring till it stops absorbing.

Work around the holes till the wood is saturated, and will absorb no more. Use multiple funnels if you have them.

Once the solvents have evaporated, which takes from a few hours to a few days if the timbers are as large as these, you then repeat the process. This will firm the timber up even more as more resin consolidates the wood further. Carry on until the rotten timber frame does not absorb further significant CPES. 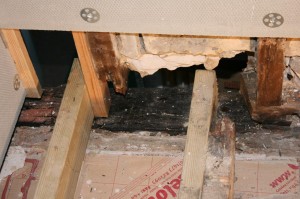 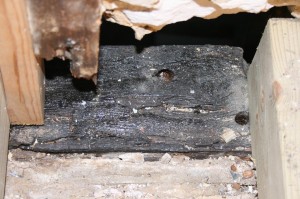 The joist on the left is held upright with the small brace to the stud, as it just rests on a brick wall at its other end. The repaired rotten timber frame carries all of the load of the joist, which has the large bath on it.

The close up shows the consolidated timber, which has been thoroughly saturated with CPES. In total I used around 5 or 6 litres of CPES to affect this repair, a lot, and not cheap, but far cheaper than replacing that timber with a wall and joists on top of it!

What If The Rotten Timber Frame Was More Structural, a Lintel for a Door Perhaps?

There are many possibilities for structural repair using Smiths CPES, but it is of course very hard to offer blanket assessments and generic ‘How To’ guides. Please contact us for more information or if you have any doubt about the suitability for a specific repair.

So What Is Smiths CPES™?

Steve Smith, an American Scientist, invented Clear Penetrating Epoxy Sealer in the 70’s. As a product it is utterly unique, and has been proven over more than 40 years in the marine and house restoration markets. This product is now available to the European market through MakeWoodGood. It’s capabilities and performance are well documented on the internet, including at www.woodrestoration.com/.

Please phone us with any problems you may have, and we will be only too happy to assist.