Knowing how wood rots opens the door to helping to resist wood rot. Getting a good understanding of the enemy makes it more likely that we will defeat the enemy.

Why Does Wood Decay? Where Does It Go?

Did you ever wonder what’s going on, with wood being there, and then in a few or many years it’s going away, and becoming weaker, and finally gone? Small Life is eating the wood. Here’s how it happens:

The life forms on this planet may be generally divided into two basic groups, animal and vegetable.  The vegetable (plants, broadly speaking) forms are characterized by the ability to absorb from sunlight the energy they need to live, grow and multiply. They provide the power (food) for all life on earth as it is only they that actually capture energy from the sun.

The animal life forms are characterized by their inability to absorb light energy from sunlight, although these definitions are simplified. Vegetable life forms are generally rooted in one place, whereas animal life forms are generally capable of movement. A mushroom is rooted in one place although it does not absorb sunlight for energy, relying instead on the energy content of its food.    In recent years the scientists who classify things have decided that  fungi are different enough from plants that they should get a third, separate category. Life forms now are  “animal”  and  “vegetable”  life forms, some of which are  called “plants” and  some called “fungi”. We are not going to get any more complicated than that, except to note that anything that does not capture energy from the sun (ie is a plant ) gains it’s energy from eating something else. This is the ‘Food Chain’. 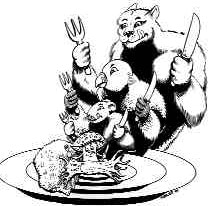 There is a “food chain”, wherein some life forms eat others.  Each life form is seeking to survive, and all life survives by exchanging energy with other life.

In some cases the exchange may be rather one-sided, in that not everyone who comes to dinner goes home of course…

Plant life, a tree in our illustration, is always at the bottom of the food chain, as the ultimate source of life energy is always sunlight. The mechanism for capturing energy from sunlight is called ‘Photosynthesis’, and is done by a green compound called Chlorophyll, which is why plants are green.

How Do Animals Live Without Being Able To Get energy From Sunlight?

Plants absorb energy from Sunlight, some of which is used to keep the plant alive, some more of which is stored in the physical structure of the plant, the trunk of the tree for instance which allows it to put its leaves into the sunlight in the forest. These plants are eaten (while alive) by animals, and sometimes by fungi. Some of those animals are eaten by other animals. Some of the plants and animals who were lucky to not be eaten entirely by others, eventually die. Various fungi and plants and animals feed on the corpses. Various other fungi and plants and animals feed on them.  Generally speaking, the ones that move the fastest and/or grow the fastest and /or multiply the fastest, tend to survive. For example, fast growing plants that scatter many seeds flourish in the Amazon rain forest, even though they cannot run quickly. For example, humans move quickly, even though they do not grow the fastest nor multiply the fastest. The life span of an individual life form is also obviously a factor. Every life form has some factors that combine to favour its survival.

Each time one life form eats another, some of the stored energy is used up by that life form in maintaining its own life, and the remainder is either excreted as waste (for that organism, perhaps, but for another perhaps as fertilizer) or stored as chemical energy within the tissues of that life form itself. It is these chemical energy stores that pass up the food chain.

How Do Fungi Work? How Do They Cause Wood Rot? 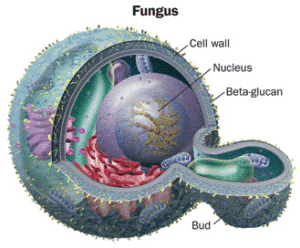 Fungi are one of the oldest and most primitive life forms on this planet. Fungi feed on just about anything, whether dead or alive. Fungi move by growing more fungal cells that spread further by growth; they don’t have legs or wings or swimming fins as some other life forms do. When a cell of fungus is in contact with something, and it is hungry, the cell secretes digestive enzymes onto what it touches. The enzymes break down the surface and dissolve it, and the cell absorbs the digested material as food. The stomach of a fungal cell is its outside surface; if a human body worked that way, our stomach would be on the soles of our feet, and if we wore shoes all the time we’d either starve to death or learn to eat our shoes.

How Do Fungi Spread? 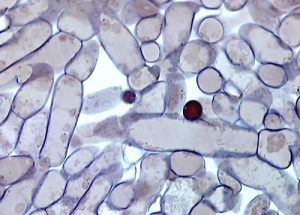 Plants reproduce either by scattering seeds, which are a kind of egg, or by sending out shoots, runners, buds or branches (some kind of extension of the main body which is capable of taking root and becoming independent). Fungi reproduce in two ways:

What Do Fungi Need To Keep Alive?

Fungi need both water and air.  As the surface (or piece of wood) that a spore has landed upon slowly dries out and gets into the moist-to-damp zone the fungal spores hatch and become very fast-growing baby fungal cells. These rapidly grow up into adult fungal cells and begin to spread over and into whatever surface they are on, causing wood rot of course, and the life cycle continues. When the surface dries up and cannot support fungal life, the adult fungal cells make many spores and leave them scattered around where they were. Eventually someone comes along and kicks that piece of rotten wood and zillions of fungal spores drift invisibly away on the wind, until they too land on a new source of food.

How Do Bacteria Work? How Do They Cause Rot In Wood? 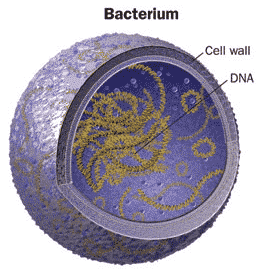 What Do Bacteria Need To Keep Alive

Bacteria tend to prefer the wood more damp than do fungi, but there is a humidity range where both can live. Many bacteria can survive drifting through the air until they contact a wet surface.  Some bacteria live completely immersed in water. Most bacteria can move about. Some wiggle, others have many small legs they use to crawl about with, or to swim through the water  in search of food or company.

What About Our Wood? The Food For These Organisms? 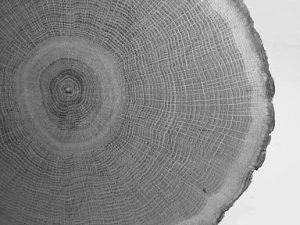 Wood is said to breathe because the natural humidity of wood, perhaps five to fifteen percent (once it has sat around in your garage for six months) can go up and down a bit as the humidity of air varies. The air humidity ranges from maybe ten percent in a dry summer to perhaps ninety-five percent in a humid summer.

Wood holds a little water very strongly and more water with less strength and even more water rather casually. When there is less humidity in the air, wood loses some of its water to the air by evaporation. When atmospheric humidity is high, damp wood may lose some of its water but really dry wood will actually capture some water from the air.  This movement of moisture in and out of wood is what is meant when the wood is said to “breathe”.

The small branches of plants are very flexible because the wood is full of water. As wood dries out it becomes stiffer. Old wood found in the desert or a dead branch of wood may be quite brittle.

Wood placed in a box and exposed to the hot steam from boiling water becomes flexible, almost “rubbery”, and can be bent into a new shape. Held in that shape as it cools and dries back to its natural humidity at room temperature, it holds the new shape. The curved ribs for many small boats are made by this “steam-bending” process.

Wood Is Hollow, It Has Space For Water, And Organisms That Cause Rot

If you put a piece of wood in water, it floats about half-above the water and half-below. This shows that wood is less dense than water. Wood is about fifty percent empty space inside, but that is before wood rot starts. More deteriorated wood in water becomes “waterlogged”. In this condition water has gotten into most of the empty space inside the wood, and it floats with less of its volume above the water, or may even sink when there is not enough air space left inside the wood. You may have seen waterlogged wood on the bottom of a pond, or handled waterlogged or damp wood and noticed how much heavier it was than dry wood.

What Is Wood’s internal Structure? 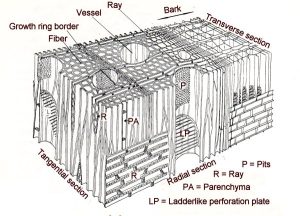 Wood, microscopically, consists of bundles of large hollow tubes with doors across the tubes every so often. These tubes are the walls of living cells, long since dead with only the skeleton remaining. The hollow tubes, the cell walls, are the skeletons of those cells.

How Does The Wood Rot? 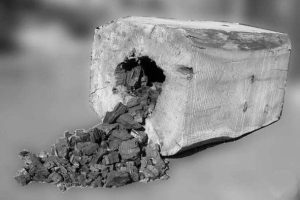 If the conditions for life of the Fungi or bacteria are correct, air and water, then the wood rot will begin.

Fungal spores are ever present, and conditions are normally correct for them to start eating the wood first.

As the fungi  eat away those cell walls, they open up the spaces between those tubes, and as the fungi dissolve the doors between one wood cell and the next, the wood porosity is opened up more and more. This allows more dew or rainwater to be more rapidly absorbed in the wood, thus providing more humid wood which is more favourable to rapid fungal growth, thus accelerating the wood rot.  As the wood becomes more porous it holds enough water to favour growth of not only fungi but bacteria, and between them they eat first the porous summer growth rings and then the harder winter growth rings, and finally there is nothing left.

How Do We Stop Wood Rot?

As fungal spores are ever present, the only means of stopping rot from starting is to stop the conditions becoming right for the growth of the fungal spores. this can be achieved in a variety of ways:

There is additional reading material available at www.woodrestoration.com.