Sophisticated adhesives, sealants and coatings are normally two-component systems. One part has to be mixed with another part before they are applied. After a while, a chemical reaction takes place, and what is created is a filler, paint or glue with exceptional properties. It is not possible to obtain those properties by taking some simple thing out of a can and this is why a 2 part adhesive will outperform a one component adhesive. Mixing epoxy and other 2 component systems has to be done properly if the benefits are to be achieved.

Each of these two parts, whether they are liquids or pastes, consists of very small components called molecules. The manufacturer designed the system so that the individual molecules of each component would react with each other in certain proportions. That is why the instructions say to mix the materials in those proportions.

If the materials are mixed in different proportions, then some molecules of one or another component are left over, scattered among the molecules of both components that did react together. In that case, the material will be softer or weaker than it should be, or will soften in water when it should not. It might be a gooey mess. It is therefore important to mix the components thoroughly, so that everywhere in the mixture the ingredients are in the correct proportions, even down to the individual molecules.

All epoxies have to be mixed together in a specified ratio.

Our epoxies are all mixed in the ratio 1:1 by volume, which makes it very easy to estimate the proportions by eye, or allows the use of a parallel container (a jam jar perhaps) with marks on it at 4 and 8 centimetres say, as a mixing aid.

Other epoxies are mixed in different proportions, sometimes as far apart as 5:1. A small error in the measurement of the smaller component here can have catastrophic effects on the mixed component, and great care must be taken when mixing to ensure that the ratios are as close to perfect as they can be.

If significant amounts of material are to be mixed I would always recommend weighing the components out. Please note that the mixing ratio by weight will often differ from the mixing ratio by volume, for instance our Oak and Teak adhesive is mixed at 10 to 12 by weight. I always choose to mix this by weight if mixing 20 grams or more, as this is easily and accurately achieved with a cheap set of kitchen scales with 1g accuracy.

Mixing Fill-It or other 2 part fillers

We make Fill-It parts A and B different colours to make it easy to thoroughly mix the product. Use a separate tool to remove each component from their own containers. I find it is easiest to mix on a flat surface, a plastic or plywood board being preferred. I choose to measure by weight for any significant quantity. 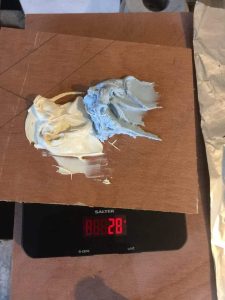 While you can still see streaks of different colours you know you must continue to smear, scrape, fold and mix until the colour is uniform. The mixing tools themselves must be scraped occasionally. If mixing a paste on a flat surface, the mixing surface itself must occasionally be scraped off. When mixing liquids in a container, mix thoroughly in one container and then scrape out the entire contents into a second container and mix again. 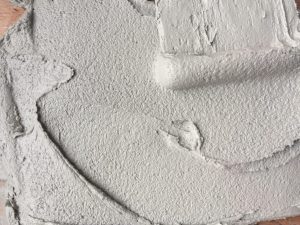 If there are any soft or gooey spots in the final cured product, that is proof that the material was not thoroughly mixed.

Mixing Smiths Fill-It for use below the waterline

The technique used to mix 2 part epoxy resins varies depending on the amount to be mixed.

Small volumes are easiest mixed on an old piece of card or plastic. If the mix ratio is 1:1 it is relatively easy to squeeze out two identical mounds of the two components. My tip here would be to squeeze the ‘runnier’ component last, if there is one, as it makes it easier to visually compare the two mounds while dispensing.

Thoroughly mix using a piece of stick. All coffee houses supply these for free in a convenient length, and since coffee tastes worse with sugar in it I can only assume that they are meant for mixing epoxy properly. Once the epoxy resin has been mixed I would recommend transferring the mixed resin to another piece of card, and mixing again, ideally with another stick. It is the small bits of resin stuck to the mixing stick or card that may be Part A or Part B and not properly mixed.

Here you have the choice of measuring by weight, which I find easiest, or by volume. Measuring by volume is best achieved using calibrated vessels or pumps if mix ratios are less than ideal, or may be done in disposable containers with parallel sides and marks if the mix ratios are 1:1 or close to it.

Again, mix thoroughly once measured, then ideally move the mixed resin to another disposable container, and mix again with another stick.